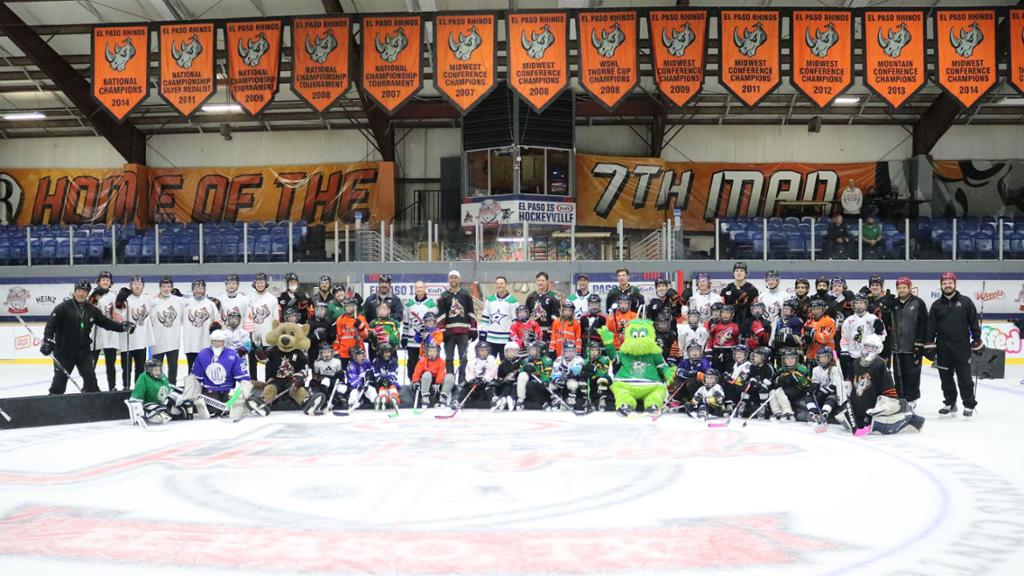 EL PASO, Texas — Casey Herald arrived at a Learn to Play clinic at the El Paso County Events Center on Saturday with his goalie gear and an Al Montoya NHL rookie card.

The 12-year-old from El Paso was all smiles when Montoya, a former goalie who was the NHL’s first Cuban American player, autographed the card and later got on the ice with other former Phoenix/Arizona Coyotes and Dallas Stars players who put 40 eager kids through their paces during two Learn to Play clinics that were part of the festivities leading to the Kraft Hockeyville USA 2020 preseason game between the Stars and Coyotes on Sunday (9 p.m. ET; NHL.com).

“I still can’t believe I get a chance to actually train with them and that they’re actually here in El Paso. It’s crazy, a once in a lifetime chance,” Casey said. “I look up to Al Montoya and all the other former goalies, so it’s just amazing and mind-blowing to have him train me.” 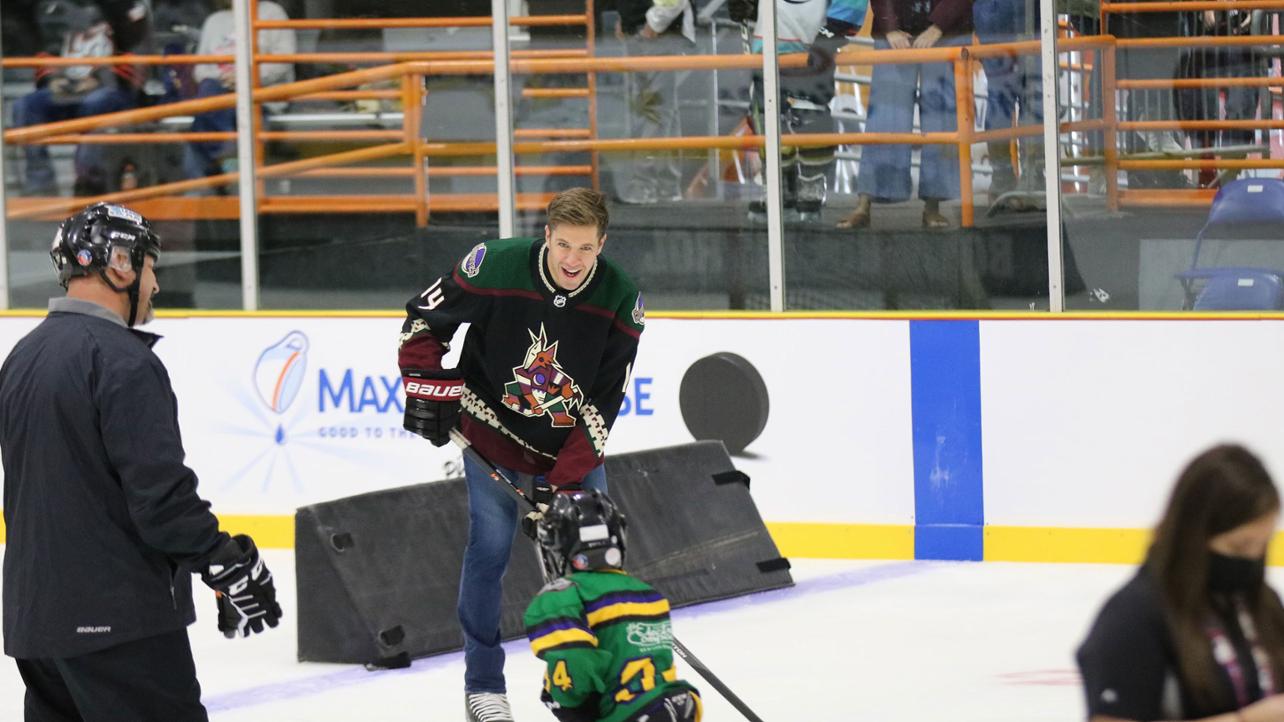 El Paso, a largely Hispanic city along the United States-Mexico border, won the title as 2020’s most spirited hockey community in America after amassing the most online votes in the Kraft USA Hockeyville contest.

The game, postponed last year due to concerns surrounding the coronavirus, is among the prizes that El Paso receives for winning the contest. The Events Center received $150,000 in rink upgrades and $10,000 in equipment from the NHL Players’ Association Goals & Dreams fund.

And the days before the game have been full of activities, including Saturday’s Learn to Play sessions.

“I never knew this was such a big draw here in El Paso, people love hockey here,” said Scatchard, a forward who scored 269 points (128 goals, 141 assists) in 659 NHL games with six teams from 1997-2011. “I was literally caught off guard because I didn’t know what to expect. I knew it was close to the border. It’s not like you grow up with a pond out back, so how do all these people fall in love with hockey? They sell out all of the [El Paso] Rhinos games. It’s amazing.”

Dwight Mullins, director of hockey development for the Stars, said the growth of hockey in El Paso has “been a long time coming” and is bearing fruit, as evidenced by Saturday’s Learn to Play turnout.

“We’ve had a great relationship as the Dallas Stars have been very supportive to the El Paso youth hockey community,” Mullins said. “It’s such a thriving little community. For our sport to have a little niche and a little pocket in this area of the country, they have done a great job.”

Gael Garcia, a 9-year-old forward from El Paso, couldn’t wait to get on the ice and get tips from former NHL players.

“It was really cool that I got to practice and play with former NHL players,” Gael said. “I learned to pass more and skate all the way hard.” 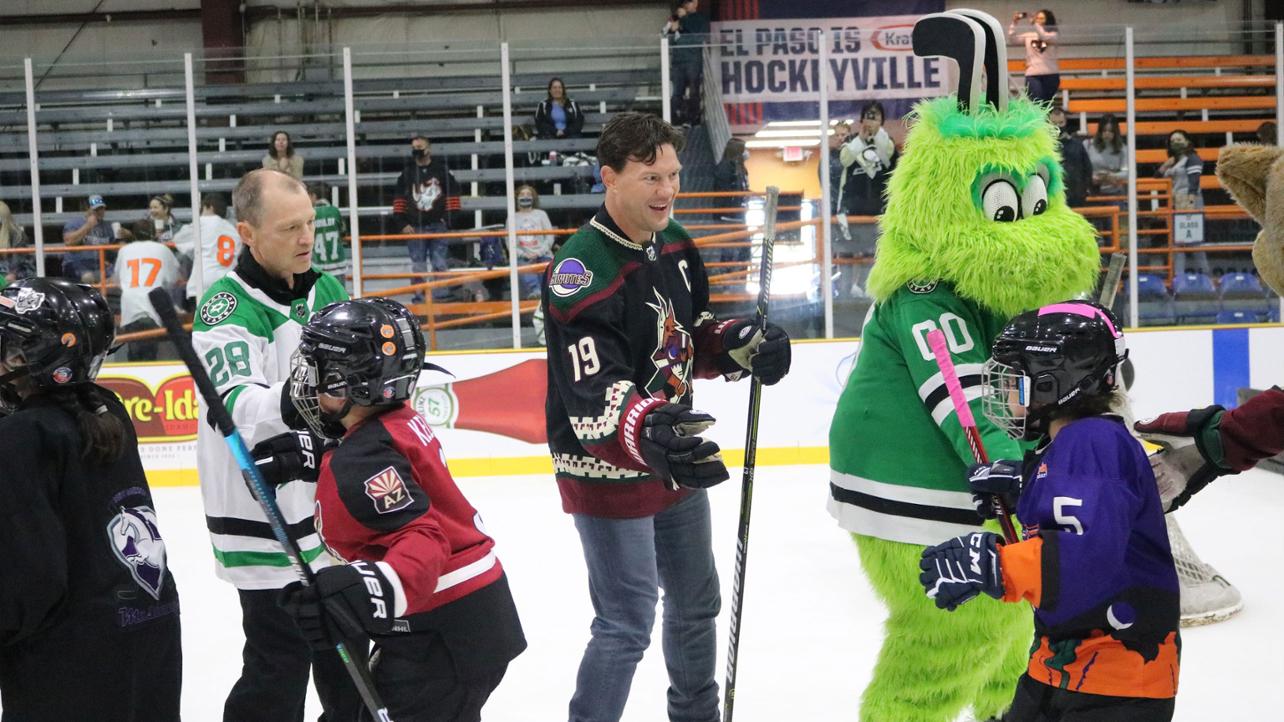 Montoya, the Stars’ director of community outreach, was also eager to hit the ice. He was moved when Casey showed him his rookie card and impressed by the number of Hispanic children who participated in the two sessions.

“To me, it was full circle,” said Montoya, who made his NHL debut with the Phoenix Coyotes in 2008-09 and went 67-49-24 in 168 games (136 starts) with six NHL teams before retiring after the 2017-18 season. “To see a kid come to me with a rookie card, I didn’t have that experience. I was raised in a house of immigrants. You didn’t have someone who looked like you who played the game.

“I never met an NHL player until I was an NHL athlete. These kids are getting that opportunity, and who’s making that possible? The Dallas Stars, the Arizona Coyotes and the NHL, and that’s something that has to continue to happen.”