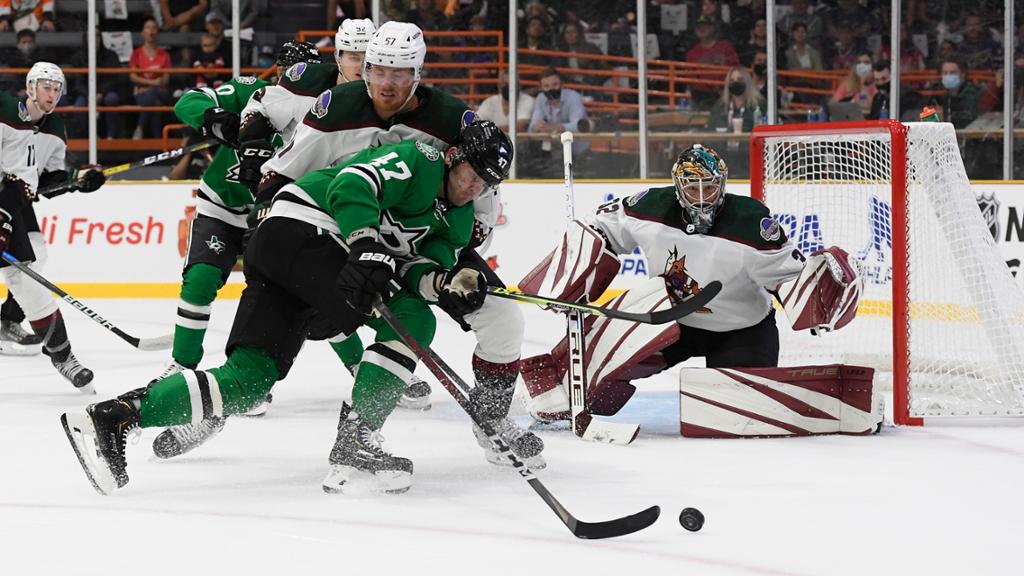 EL PASO, Texas — The celebration may have been delayed a year because of the coronavirus pandemic, but Kraft Hockeyville USA 2020 was worth the wait for El Paso.

Playing in front of 1,200 fans at the renovated El Paso County Events Center, the Dallas Stars defeated the Arizona Coyotes 6-3 on Sunday.

“I thought they did a great job of putting on a fun show and we had a great turnout,” Stars goalie Jake Oettinger said. “Overall, it was a success. It was a great crowd, great atmosphere and it kind of brought us all back to our roots. It was a really fun experience.”

Jamie Benn had a goal and two assists, Miro Heiskanen had three assists, and Tyler Seguin and Thomas Harley each had a goal and an assist for the Stars, who won for the first time this preseason (1-2-1). Oettinger made 28 saves.

Members of the Stars and Coyotes each said they were impressed by the passion for hockey they witnessed in the area.

“I think that’s what our goal is to do,” Arizona forward Lawson Crouse said. “Hockey is a great game and we want to allow as many people to play it as we can, and Kraft has done a great job of doing this.”

Shayne Gostisbehere, Liam O’Brien and Christian Fischer scored for the Coyotes, who lost for the first time in the preseason (3-1-0) but enjoyed the experience.

“It was awesome,” Crouse said. “I think it’s a really good thing for the town of El Paso for us to come up here and hopefully put on a good show for them and keep them engaged. … It kind of reminded me of being a kid again, having the pregame skate here this morning with all the fans here. It was a lot of fun and very enjoyable for us all.”

The crowd was comprised of more Stars fans, although Dallas is roughly 620 miles from El Paso. The Coyotes play about 450 miles away in Glendale, Arizona.

“It was great; a small rink, the fans were really close to the players and the pace of the game was really fast, so it was a great experience,” Coyotes coach Andre Tourigny said. “I didn’t know much about the town, [but] seeing the fans being into the game and cheering for both teams, that was great.”

More than 80 percent of the population in El Paso is Hispanic. Although it may not be a traditional market for hockey, the sport has thrived here.

“People in El Paso love hockey,” fan Shirley Kaiser said. “Now you’ve got the National Hockey League, now you’ve got national players to be a part of our home and we can share our hospitality.”

Ramon Tejada, who attends El Paso Rhinos games, the junior teams of the North American Hockey League and North American Tier III Hockey League, said he was thrilled to see the NHL come to the area. Tejada brought his hockey stick-noisemaker that he usually uses to bother the visiting team during timeouts, and it was heard throughout the game.

“I’m excited, I’m speechless,” he said. “It’s hard to explain but seeing the Stanley Cup (in El Paso) was something that was inspiring to us.”

The rink received $150,000 in upgrades, which primarily went towards fixing the roof, new lights, breezeways and renovated bathrooms.

“It’s still a Rhinos barn with an NHL feeling, with a party feeling,” fan Jorge Ortega said. “You know, when it’s your house and you decorate it for Christmas or Halloween, something like that. It’s a Hockeyville feeling. It’s decorated for something special. It’s been great, the environment, it’s unbelievable.”

Rhinos players got to shovel the ice during the TV timeouts and received an ovation from the crowd, who appreciated having an NHL preseason game in their town.

“Any time you can spread the game, grow the game to places obviously that don’t have hockey in their deep roots, that’s what we’re trying to do and put on a good show, so people continue to come back,” Oettinger said. “Once you get people to watch hockey for the first time I think people are hooked, and hopefully we gained some new fans tonight.”